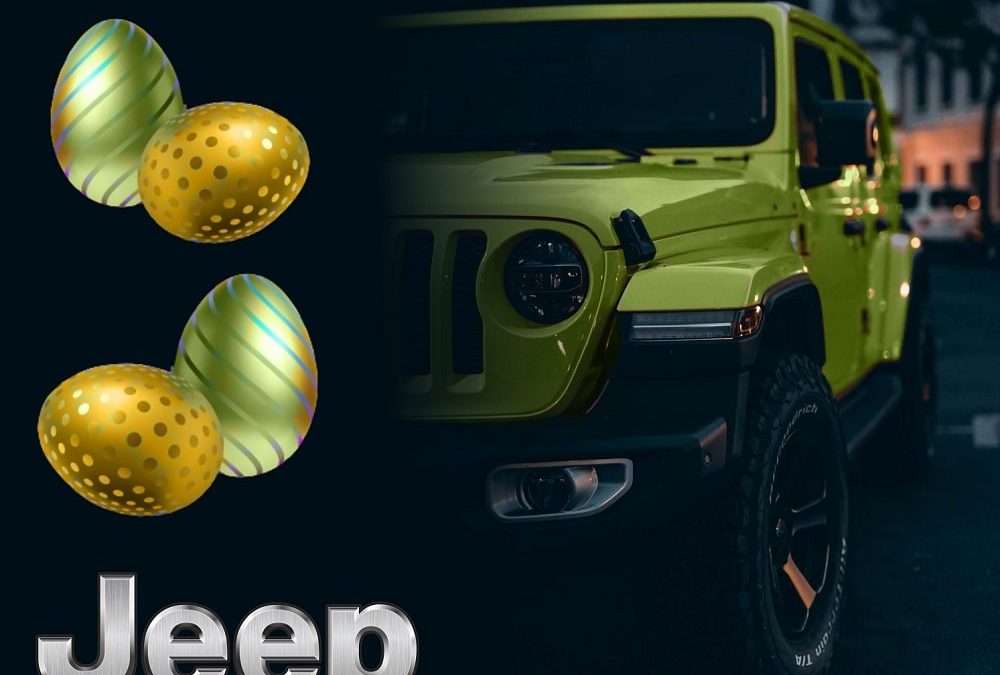 Did you know that many jeep models have unique elements hidden by the jeep designers?

A lot of people didn’t know until 2020 when jeep owners started sharing some of the many easter eggs they found online.
And while it sounds like a rumor, it’s true! Jeep wranglers and other cars have easter eggs hidden all over the vehicle. Some even have more than one if you look close enough.
While these hidden easter eggs are not helpful in vehicle performance, the original markings are fun to find, and most are a subtle nod to something. Additionally, it secures the authenticity of the vehicle, in the automotive world.
Plus it’s fun to find hidden easter eggs! So if you’re a jeep owner looking for the signature mark that makes your car a little cooler, keep reading to learn more about the fantastic jeep vehicles easter eggs and where to find them.

Jeep designers have a rich 23-year history of hiding easter eggs in various jeeps. It started in 1997 when car designer Michael Santoro wanted to leave a unique imprint on the Jeep wrangler 97 he was working on. He called it ‘making it more Jeep.’
With endless possibilities and ideas, Santoro decided to pay homage to Jeep’s iconic 7-bar grille design. He hid a miniature replica of the design in the space between the windshield and the hood, or cowl. It was the first easter egg.
This easter egg became one of the most popular ones to find, and since then, the designers have become more intricate and playful with the easter egg designs on various jeep wranglers, jeep compasses, rubicons, JLs, and jeep renegades.
Now, every jeep vehicle that rolls out of the factory has a signature mark, and we can help you find them. But first, it is helpful to know what you are looking for.

The vintage WWII era Jeep is easily one of the most recognizable and classic jeep cars. Most people recognize the 4×4 design, and it went on to induce the functionality and design of other cars.
Many jeep wrangler owners have found a miniature jeep on their wangler’s wheels and windows. It pays homage to the car, and it is easy to find in other models even on the jeep grand cherokee.

A T-rex chasing a Willys Jeep


Yes, you read that correctly; some wranglers have a silhouette of a Tyrannosaurus Rex chasing a the iconic 1st generation jeep. Some believe that designers chose the T-rex to imply how old the Jeep is. This easter egg also comes in multiple variations in wranglers and other jeeps.
It could also include a tiny sasquatch running from the Jeep, which the t-rex is chasing. Some people have found this jeep’s easter eggs on their windshields and windows.

Some wrangler owners have found a little gecko or lizard hiding under their windshield wipers and dash. This lizard appears in many other jeeps, and many internet users have met with their little jeep pet.
Jeep choose a lizard for its ability to travel through rough conditions, including the desert.
It is one of the larger easter eggs, so if you have not seen it, it is because it’s lying in a strange position. Change your perspective, and you might find the lizard. Most people find it when standing outside and looking down at the front windshield. 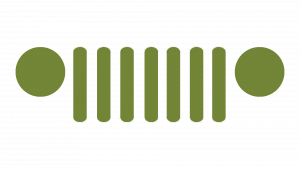 And finally, if you have the classic 7-slot grille that first appeared in the 97 wranglers, consider yourself lucky. Those who have found this easter egg saw it in the cowl and the underside of the hatch. Some have also found it hidden in the headlights and taillights.

Below are some of the easter eggs that have made it onto other Jeep models. To read more about all of them continue below or click here for even more details!

A pair of flip flops

While it sits barely visible on the jeep gladiator and jeep wrangler’s cowl, you can find a pair of flip flops on these vehicles. And why would designers put this footwear style on their cars, considering that sandals are not ideal for off-road adventure?
Well, the decal pays homage to automotive journalist Rick Pewe. Rick Pewe is known for his love of this footwear style and is photographed wearing flip flops in many pictures. Not only did he help with the JT and JL, but he is also an off-roading champion, so you are close to greatness if you have this easter egg.

Jeep Compass owners have met with the mythical loch ness monster on their rear window. This interesting mythical creature decal appears squiggly and clearly on the window.
Designers have stated that this represents the Compass’ ability to traverse in shallow waters of up to 19 inches high.
A topographical map of Moab, Utah
People often think that their gear shifters have random makings on them, but this is actually the map of Moab, Utah. Jeep renegade owners have found this topographical map on their center console cubby. Other models have it on the gear shifter. This Jeep easter egg makes sense since Moab is a popular destination for off-roaders.
An orange paintball/ mud splatter
The orange paintball/ mud splatter often appears on the Jeep Renegade tachometer redline. Jeep renegade users who have found the easter egg have said it is similar to a mud splatter, a typical encounter for off-roaders.
The orange paintball splatter also represents how a Jeep vice president of interior design’s goggles looked after an interactive renegade staff paintball game.

Jeep renegade owners had expressed their joy and surprise when they came across the spider easter egg saying ‘ ciao baby!’ on their fuel door. It is easily one of the hidden ones that will make you go on a thorough easter egg hunt.
So why Italian? Well, it is the national language of the renegade builders. And the spider is a nod to how arachnids often got inside the fuel tanks, causing many problems.

This decal has multiple variations, including the jeep climbing on a rocky hillside, being driven by a t-rex, and even one being chased by a Star Wars AT-AT. These decals often appear on the windshield, tires, and rear windshield of the vehicles. They appear on the Jeep Cherokee, Jeep compass, and wrangler JL.

Bigfoot appears in multiple jeeps, including the Wrangler JL, Grand Cherokee, and other models. Bigfoot is climbing a rocky hillside approaching a wrangler, or walking away from it. The tiny sasquatch is a reinforcement of Jeep’s rugged undertones.

This interesting easter egg often appears on the floor mat of most jeep vehicles. Jeep owners go years without discovering this easter egg. But it is not surprising as many models have the dinosaur reference. Some say that Jeep associates itself with the dinosaur skull for being old but precious, like fossils.

This is an interesting easter egg for jeep wrangler JL owners. The car has a morse code stamp right under the JL logo. The code literally translates to JL. Others have found morse codes on the left foot rest, by the pedals. The translation reads ‘ sand, snow, rivers, and rocks’ which is all the terrain a Jeep can conquer.

Some Jeep gladiators have the number 419 engraved into the rear of the vehicle. 419 is the area code of Toledo, Ohio, where the car is manufactured.
To new adventures!
Although it might be hard to read, newer jeep models have the word ‘to new adventures’ written around the start engine button. This line indicates the true spirit of owning a Jeep, adventure!
No Step!
Have you ever noticed the black plastic side rails of your Jeep? They probably have’ no step’ on them, which is an order and a joke. The rails are too thin to be running boards. So the designers put these aircraft-style markings on them.

The ‘X’ symbol appears in many Jeeps on the detachable panels, roof, cupholders, taillights, etc. This interesting design is a nod to the bottom of gas cans used in the war.
1941
And finally, ‘1941’ appears on multiple jeep models as an excellent reference to the first 1941 Willys. It was a pre-production vehicle made for the US army. This easter egg often appears in the gauge cluster of the car.
Easter Egg Conclusion
We hope you enjoyed reading about how to find easter eggs and other hidden elements on the Jeep Wrangler. If you find yourself wanting a Jeep Wrangler head to your nearest dealership for a test drive and thanks for reading!